Skip to content
Home » Self Build » Rebuilding the wardrobe section of my van.

I was fed up of cupboards.  They were a pain for a fulltimer especially in such a small van.  I decided to rip them all out and put drawers in instead.This is a massive undertaking for a fulltimer as everything has to be done in a single day, or has to be in such a state whereby everything continues to work and be usable at the end of each day.

The first stage was to rip out the cupboards and fridge cabinetry.  This took longer than expected because I had not built this one to be disassembled. 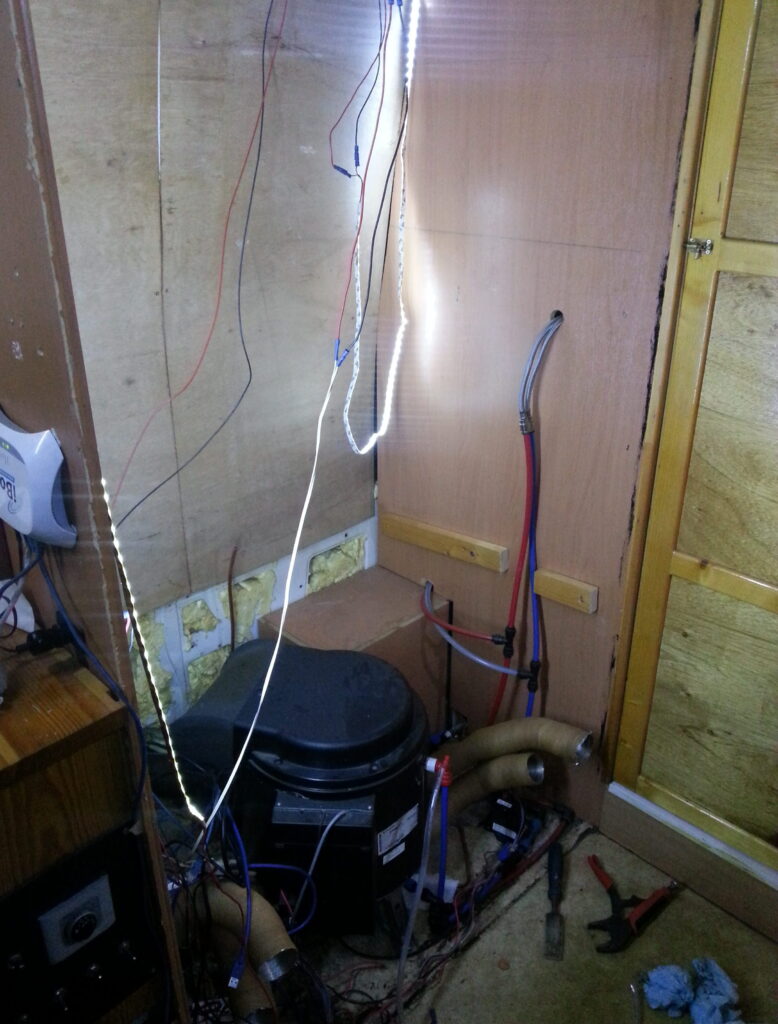 Next stage was to rip out my office space and electrics.  Sorry about the blurry cam.  Once I had it to this stage it took me a further 2 hours to disconnect all the wiring and dispose of the bits I was doing again. Next stage was to get the the framing in which I had previously cut and dry fitted outside the van.  I love the pocket holes jig.  The front frame was made of planed 25 x 50 strips of pine which were given 3 coats of polyurethane varnish 3 weeks prior to the installation.  Being trapped in a van with even 2 week old varnish is no fun.  The legs at the bottom were temporary until I got the side wall installed. 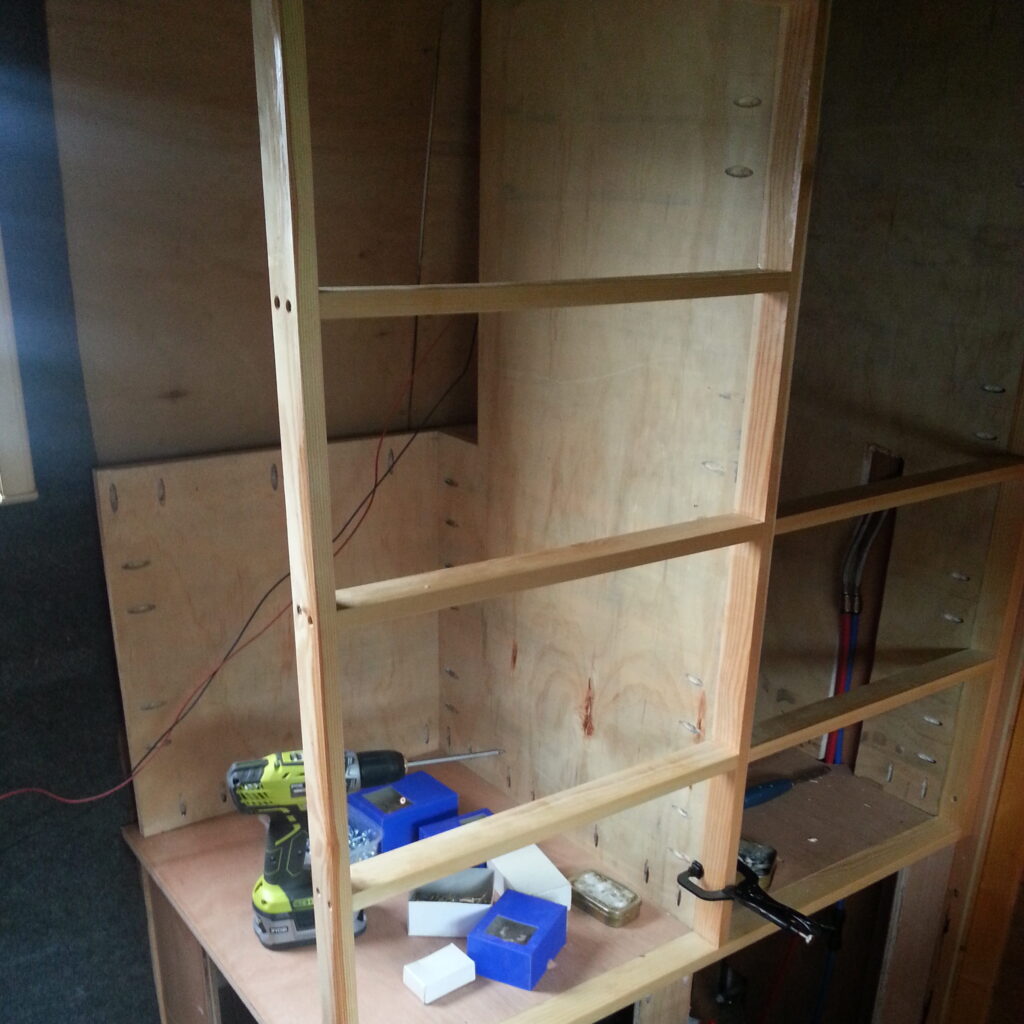 Next stage was to get all the sides installed with a cut out for the tap pipes so I could still access them by pulling out 2 drawers.  This was into day 2 so I had installed a temporary light switch for the previous night.  I also dry fitted the bottom two drawers and put the first shelf in to ensure everything was square and to the right size.  As you can see the draws were made of MDF with a channel in the sides for the sliders. 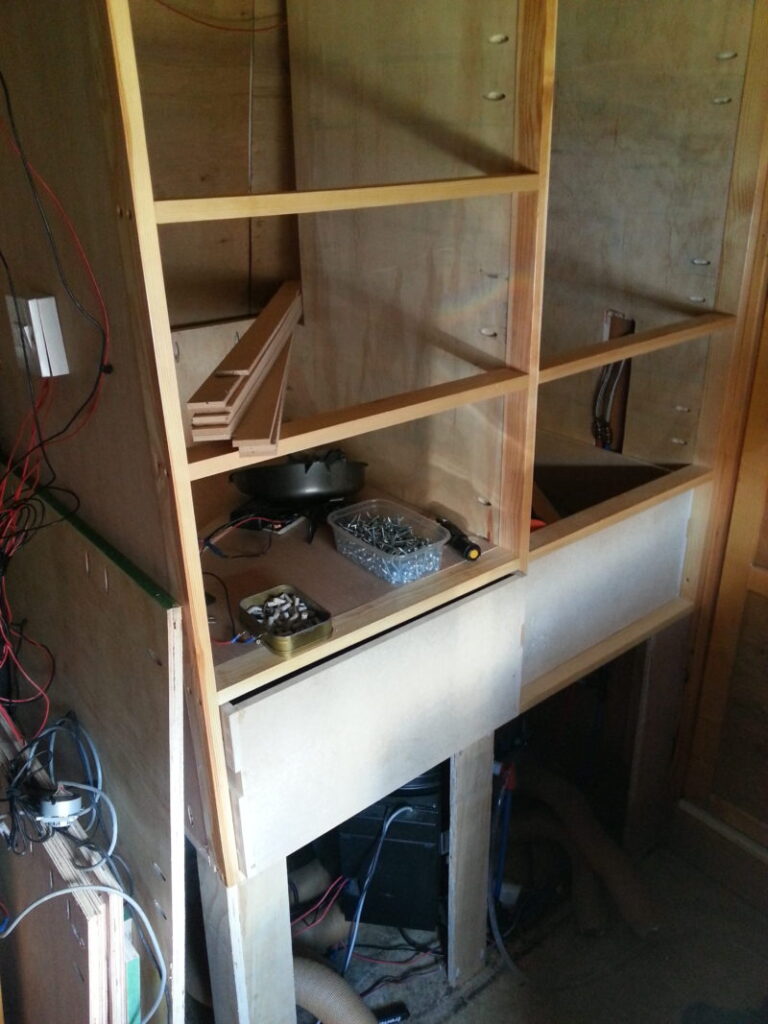 Prior to fitting the shelf above,  I fitted the drawer front.  I had to do this so that I could get the draw fronts with an equal a gap as possible and I could screw them in while in place.  The handles were also drilled and fitted at the stage as I wouldn’t be able to pull them open again once the shelf above had been fitted. 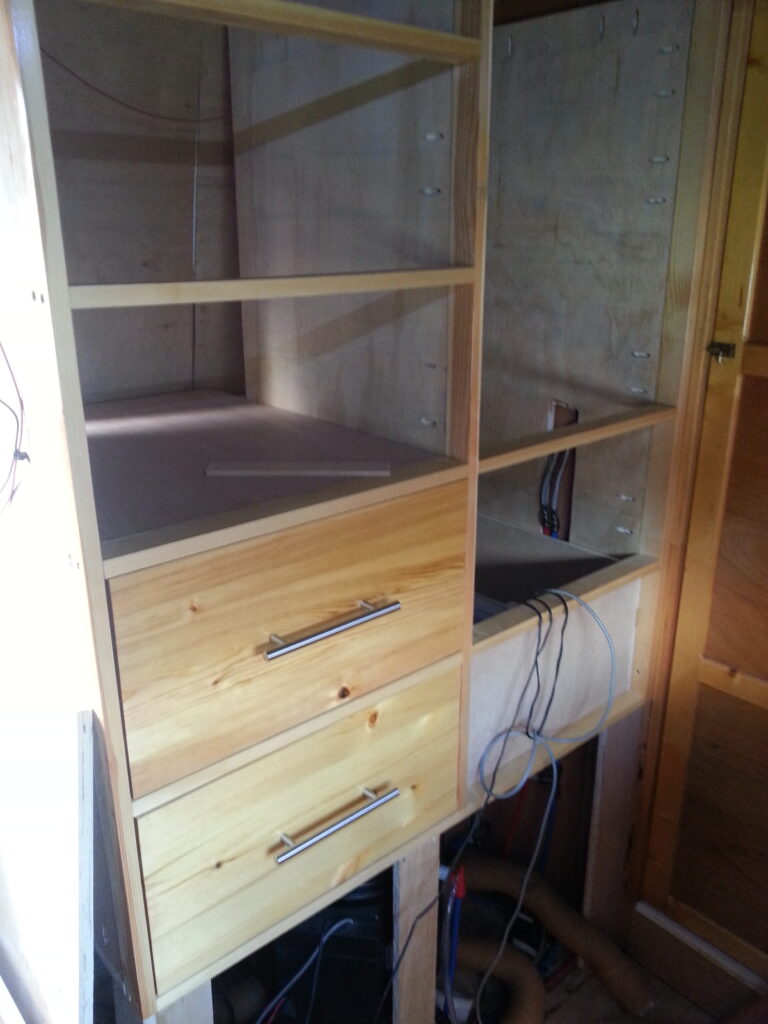 5 out of 6 drawers completed and out of time for today. 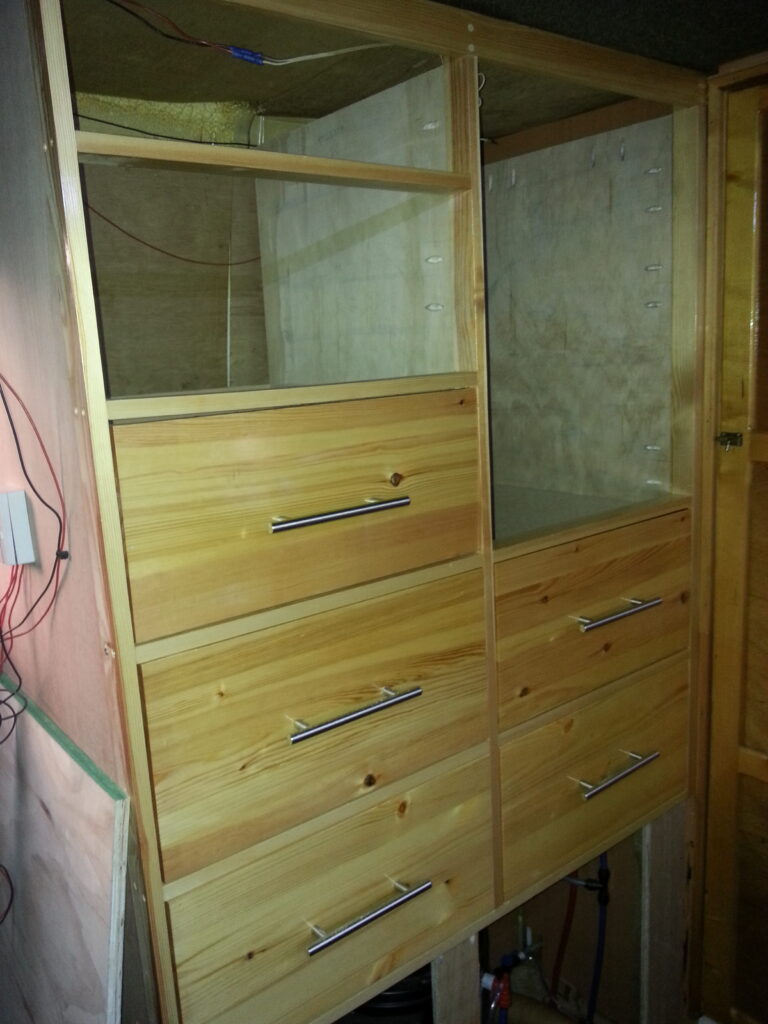 Fitting the last drawer.  I then installed the side wall and the shelf unit and got to work on the new floor and electric cabinet. 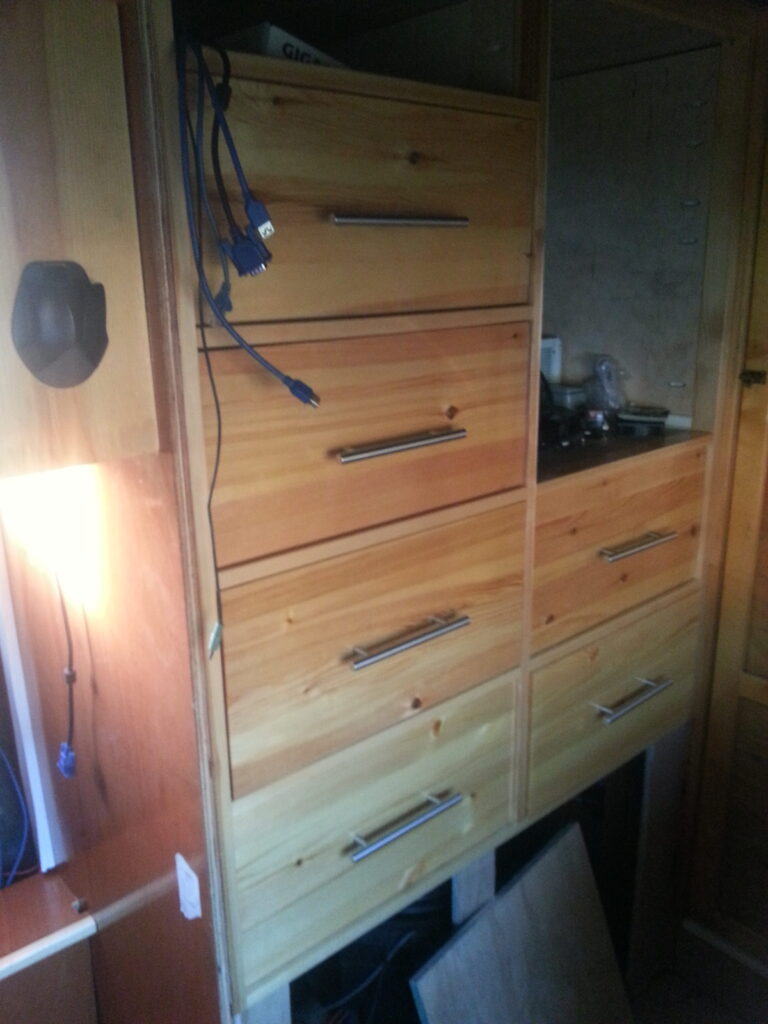 The new floor and electric cabinet.  The top of the electric cabinet will be screwed solidly into place and the front will have a magnetic catch holding it in place.   All the cabling will disappear. 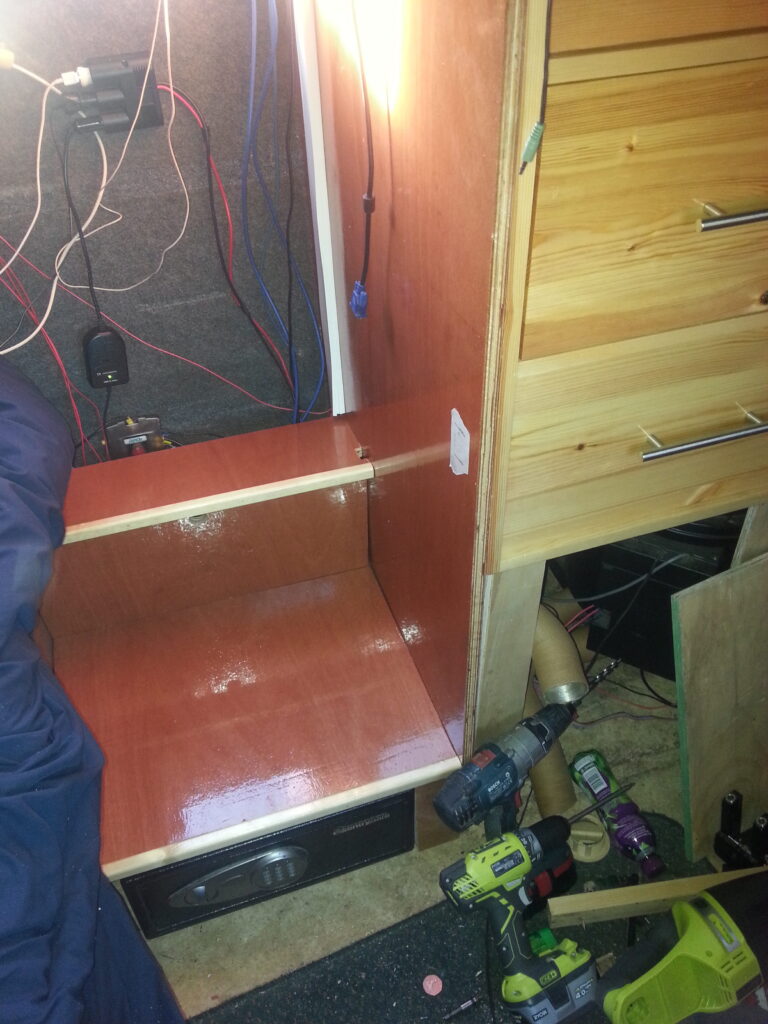 The side of my computer table installed with the low tech control panel. 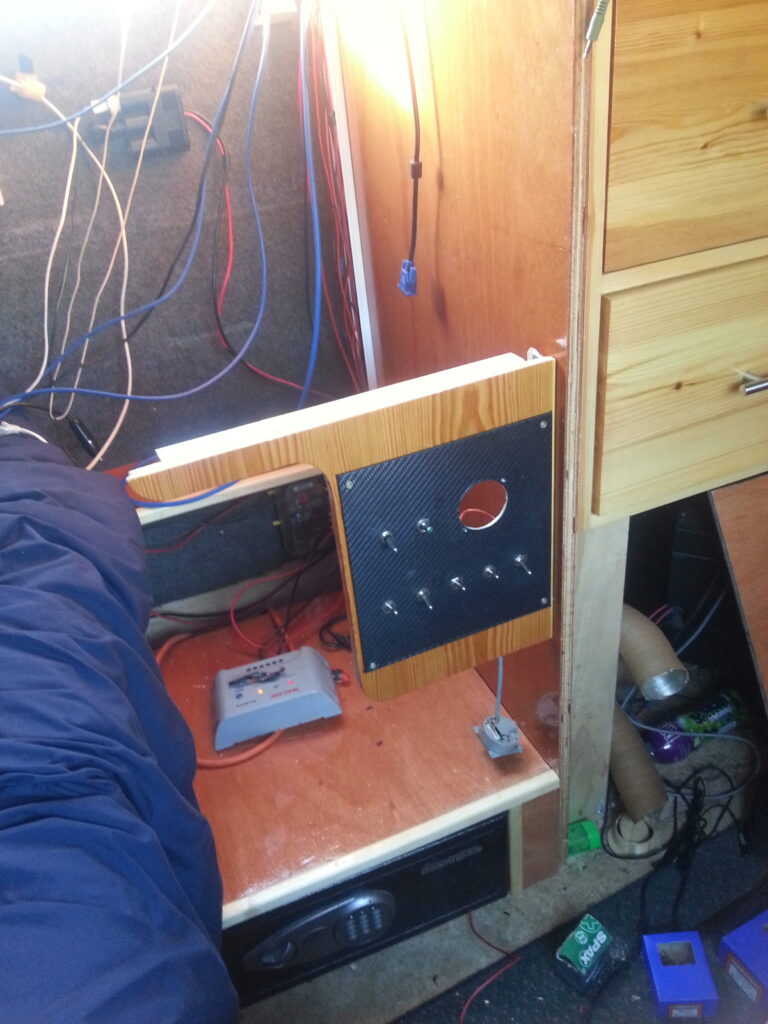 Checking out the old batteries before they are removed..  New batteries with isolator being fitted on the next job. 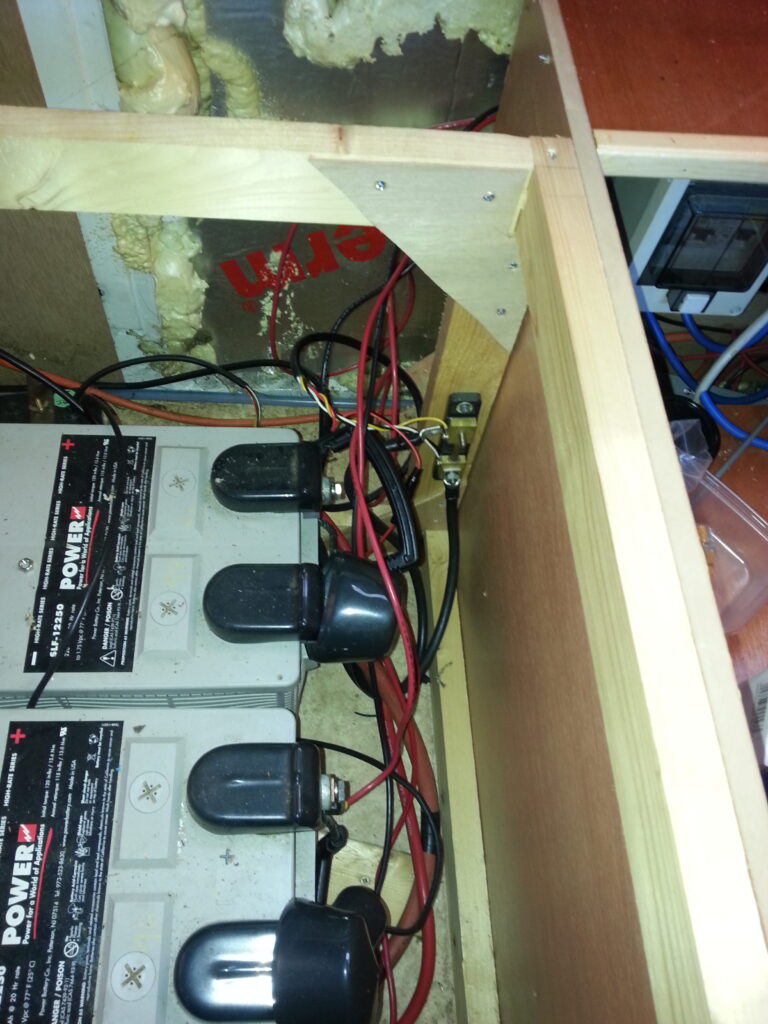 I did take more pictures but they appear to have gone walkabout.  If I find them I will post them.

If you want to see more of my Self Build notes,  click on the self build link on the right hand side menu near the top.

3 thoughts on “Rebuilding the wardrobe section of my van.”